Of all the unnumbered appeals held by London’s exploding food-scene, a key thrill has always been the innovative pace with which boundaries are blurred to create new and unique concepts.

This year heralds the arrival of a vegan burger bar, a “cuisine-agnostic” Indian-inspired restaurant (by the name “Flavour Bastard”) and a dessert-only food festival. We’ve also had a cheese truck and Indian supper club set down permanent roots, most recently joined by a street trader famous for their Ugly Dumplings…

Of course, there’s nothing ugly about either the fusion dumplings or the restaurant itself, which has opened on a quiet corner of Newburgh Street in Carnaby.

It’s a humble space – fuss-free and cosy, with a happy-go-lucky vibe bouncing off a laid-back soundtrack. A rustic glass jar of flowers adds a gorgeous burst of colour against the makeshift bar and the kitschy coasters are so loveable, that we request the affable owner Philipp to take a few home with us. He does one better, handing over a few similar stickers for my phone and Foodie Diaries (they were created as seal for the takeaway boxes).

Cheerful touches like these come across as refreshingly thoughtful rather than pre-contrived for a maximum impact on social media. Speaking of which though: the natural light streaming in, pretty-in-pastel ceramic plates and the dumplings themselves, are in fact the stuff of an (this) Instagrammer’s dreams.

And yet I’m somewhat embarrassed to find that it’s just me risking the perils of a cold dumpling as I stand awkwardly to nail that perfect flatlay shot. My long-suffering friend Lemma, deftly distances herself from the situation by striking up a conversation with Philipp about their shared sporting interests (he happens to be a former Olympic reserve swimmer for Russia).

Nothing ugly about these uplifting dumplings @Ugly.Dumpling.UK – a cheery new addition to @CarnabyLondon! The sides stole the show (don't miss the devilishly deep-fried aubergine tempura) and the happy-go-luck music likely explained why we overstayed our welcome this afternoon… There was also the matter of white chocolate & matcha dumplings for dessert! #UglyDumplings #Carnaby #ThursdayIsTheNewFriday #EaterLondon #TopLondonRestaurants #TheFoodieDiariesLondon

There are only a small number of tables around us (additional seating can be found downstairs), but they are occupied throughout the afternoon with a steady stream of walk-ins. At one point, the room shakes with the infectious chatter of a gregarious group of friends; at another juncture, there’s a companionable silence echoed by the turning pages of the book absorbing a solo diner.

The tables do have one thing in common: almost all sport a blood-orange glass of Aperol Spritz. Made in small-batches, it’s available on tap as a perfect pairing with the sunshine-filled plates and sides.

The dumplings on the menu follow the Asian home recipes of the street-stall’s founder Ping Wong. However, they’re suffused with a fusion-twist, often taking their cue from Philipp’s imaginative combinations.

Halloumi & courgette is undoubtedly my pick of the lot, almost meaty in texture and encased neatly within the pan-fried parcels. The mushroom and truffle filling has an intensely-rich and earthy appeal too, with just the right burst of umami from a generous layer of  shredded cheddar cheese on top. Meanwhile, Lemma enjoys her prawn and chive dumplings, which arrive marinated with shaoxing rice wine.

A few of the other dumplings pale in comparison – their skin overly-chewy and the fillings lacking a similar boldness and depth of flavour. The spinach and tofu is one which falls short but is compensated for by a smattering of sides, all of which are vegetarian and / or vegan friendly. Most – barring a beetroot noodle salad – are gluten-free too.

The aubergine tempura might just be the best thing to eat here: it’s thick coat of deep-fried batter revealing melt-in-your-mouth slivers of aubergine dressed with honey. Who doesn’t love such a brilliant notch of naughtiness?

There are also sweet-and-savoury miso-glazed courgettes and cubes of pickled watermelon, both of which come jauntily jumbled with avocado and peanuts. It’s safe to say that these sides steal the show.

There are more dumplings by way of dessert.

We love the gooey explosion involved with the steamed blueberry dumplings, but would far prefer to have seen the sweetly-sticky filling cocooned with a fluffy bun instead. The white chocolate and matcha dumplings on the other hand, are as good as they sound. They’re closer to spring rolls in texture, with a devilishly deep-fried exterior giving way to a sharply-bittersweet green tea liquid laced with a milky white chocolate… 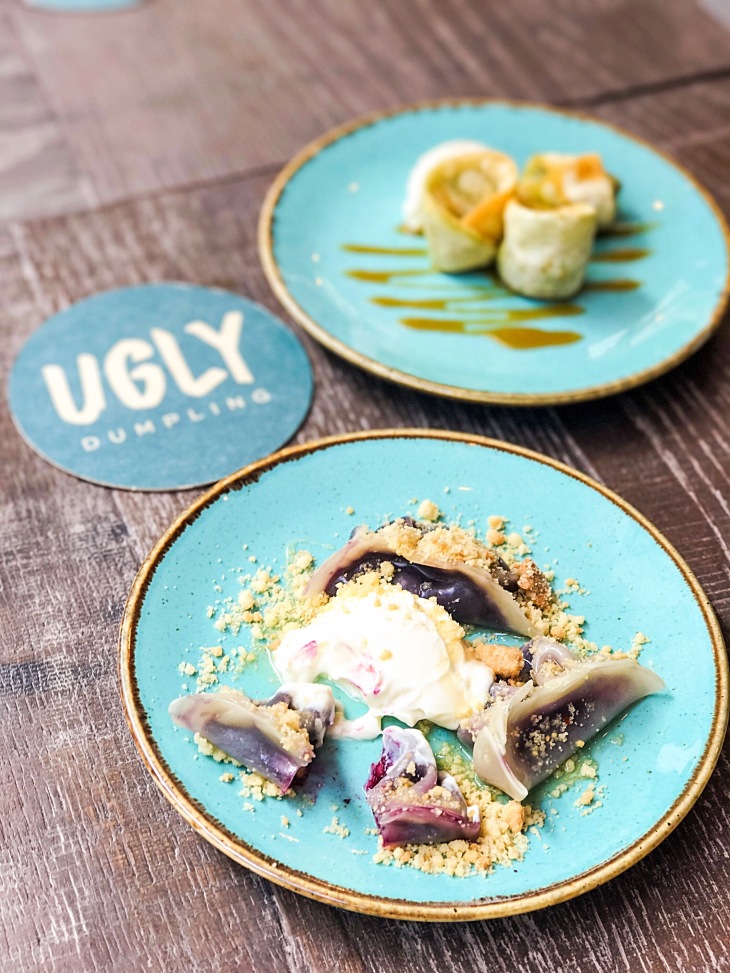 It all makes for an indisputably uplifting afternoon, propelled in no small part by an easygoing ambience, the loveable touches and rather winsome background music. I’d definitely recommend popping in the next time you’re passing by Carnaby.

For more new & noteworthy openings, have a read of my rolling round-up here.

… If you’re wondering how I stay in shape despite eating out daily, here’s my secret: I walk. A lot. I used this particular afternoon to dawdle around Soho afterwards, finally finding my way to House of MinaLima to indulge in a bit of Potter Mania. But that’s a story for another day…

A food travel & lifestyle journal, chronicling my culinary and other adventures around town. View all posts by The Foodie Diaries

Stay ahead of the curve. Sign up to my newsletter for a bi-monthly bulletin on the latest word in food, travel, culture, life and style…

Just sayin’ // Tag your waddling friends who can relate //🤰🏻#36WeeksPregnant #TheBabyDiaries
An old favourite reborn in an alluring new avatar @GustosoIndia! Reopening post a shiny makeover, this neighbourhood stalwart in Kemps Corner delivers both style and substance in delicious spades🍕🍝🍷 #TheFoodieDiariesBombay
Sunset cocktails (or in my case, a Hot Toddy) @TheEauBar’s recently-opened outdoor space! It’s going to be a while before I can officially sip on 🍷🥂🍸(#35weekspregnant) but luckily there’s plenty else to drink in here , with the stunning vistas of the most cherished corners of the city! 📍@TheOberoiMumbai // #SunsetMuse #TheFoodieDiariesBombay.
When you stumble on a scene straight out of a history book ! Oh Bombay, you never cease to enchant with your old-world charm and vintage corners 😍 #WindowsofInstagram #TheFoodieDiariesBombay
... And to the best chocolate cake in town! If you know, you know the #Feuillant @TheOberoiMumbai, a marvellous balance of mousse and crunch, festooned with milk chocolate fans !
To a life of love and a love for life ❤️ #AyuReadyMehra ➡️ #AyuReadyMehras as we enter the final stretch before a new chapter ahead! #35WeeksPregnant #Tb #ValentinesDay(LatePost) #TheFoodieDiariesBombay
Dreaming of the right kind of #MondayBlues! In reality, struggling to finish an overdue report (#ConsultancyLife) on low caffeine (#PreggoLife). How’s your week kicking off? 📍@FSAthens // #MondayMood
When your weekend needs a decadent dose of chocolate and your evening cuppa Earl Grey manifests in a creamy scoop of ice cream! 📍@TheTable_Colaba // #TheFoodieDiariesBombay