Sadly, I was never one of those creative children who had an imaginary friend whilst growing up…

But, I’ve managed to make one later on in life – Phileas Fogg Esq., the great British explorer brought to life in Jules Vernes’ timeless novel, Around The World in Eighty Days.

Better late than never, as they say?

I often frequent Fogg’s treasure trove of a residence in Mayfair, not least for the cracking cocktails. And then there’s the charming pied- à-terre in Covent Garden that he inherited from his auntie, the famous actress, Gertrude Fogg…

I had the pleasure of attending a special preview ahead of its official opening last year, while also recently revisiting the lively Tavern downstairs… Run by Gertrude’s lifelong housekeeper, the vivacious Fanny McGee, the Victorian-style pub is very much a place of merriment, bursting at the seams with all sorts of artefacts and oddities that wouldn’t be out of place in the nineteenth century!

Honest fare is the name of the game here, washed down with real ales, batch brews and grog, served up in tankards and pewter cups…

Whilst the area upstairs houses the most elegant Gin Parlour and Salon – a suitably dignified spot for Phileas and his friends to retreat to whenever in need of a tipple and a leisurely break from the bustle of central London.

Tipples come in all shapes and sizes here actually, including in the form of tea-infused champagne and gin cocktails poured from vintage tea pots every Saturday at precisely 3.01pm.

Seeing as there are few better ways to spend the good part of a weekend afternoon, my cuz and I promptly arrived  at the appointed hour, thirsty for a Tipsy Tea…

We were greeted with a a perky aperitif as we entered and had no trouble making ourselves at home right away, as one would in the home of an old and beloved aunt.

The decor is dainty and not just slightly eccentric, filled with trinkets and mementos from Gertie’s theatrical heydays, as well as the recent additions from Fogg’s famous trip around the world… there are distractions-a-plenty to keep you from the main task at hand – choosing between the exciting gin and champagne-based cocktails on offer!

Having really enjoyed the fruity notes of our welcome drinks, my cousin, Eshita, opted for “What’s ‘mile is yours and what is yours is ‘mile” – an invigorating mix of Fogg’s Bucks Fizz, chamomile, fresh orange juice and lemon juice, indulgently topped up with Veuve Clicquot Rich champagne.

While I was inspired by “Friends, Romans, country mint!” – an artfully smooth infusion of peppermint tea syrup and Veuve Clicquot, with a subtle smokey twist. 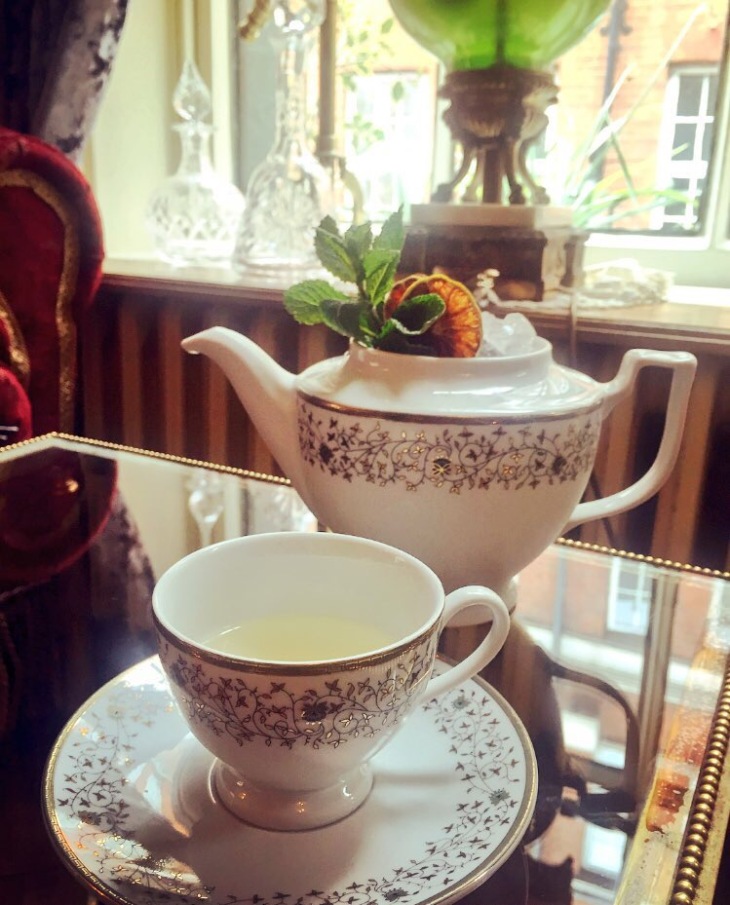 If you see a pattern emerging – you’re spot on, as the quirky titles have all been inspired by the great works of Shakespeare!

The theatrical theme extended to the afternoon’s entertainment too, with a magician on hand to regale us with the niftiest of card tricks among other captivating acts…

… Before our three tiers of deliciousness arrived.

While the eats and treats were relatively fancy-free, they were punchy in flavour… wholesome, hearty and scrumptious! 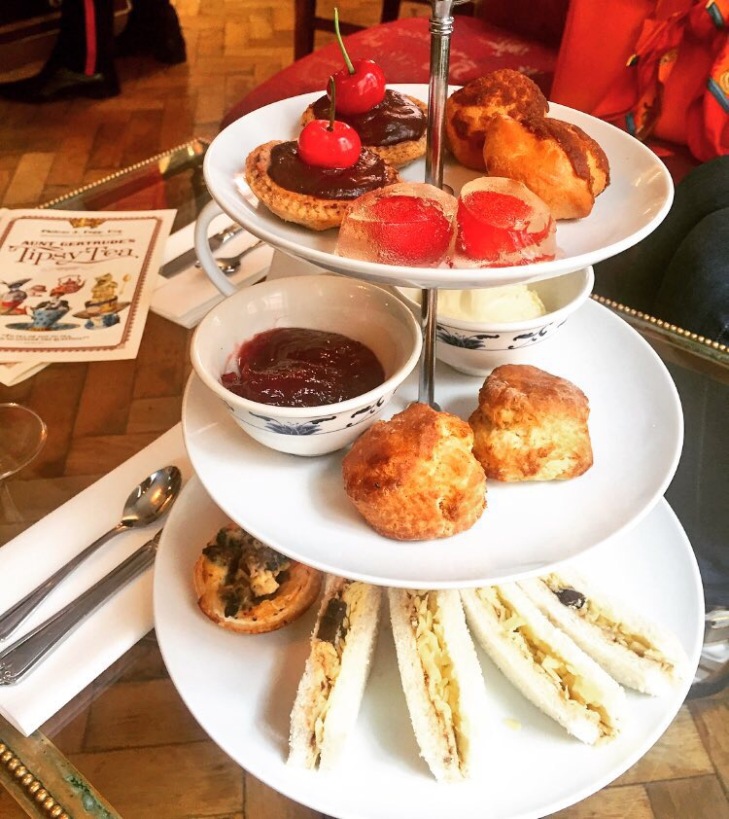 I really loved the good mix of savouries offered, which neatly balanced out the sugary indulgence. In addition to the oh-so-moreish cheddar & pickle finger sandwiches, we also munched on mushroom and cheese puffs and tasty-somethings resembling mini Spanish omelettes, as vegetarian-friendly alternatives to the sloe gin smoked salmon with caviar and brown crab sandwiches that fellow guests were tucking into.

It was on to the scones next… And although they weren’t the best I’ve had, they were more than satisfying with just the right touch of crumble.

The final tier featured more tea-time fancies, including a jelly-like mousse and light profiteroles which revealed a surprise marzipan-esque filling. A rich dark chocolate tart with a cherry on top wasn’t amiss either! 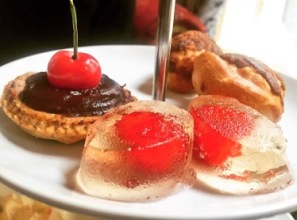 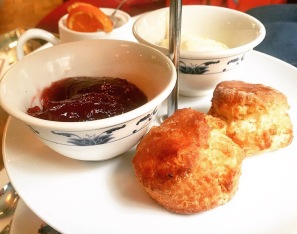 Much like the Tipsy Tea at Fogg’s Residence, we saw the entire experience as a welcome escape from the ordinary.

It was an afternoon smashingly well spent!

I was hosted by Fogg’s Tavern, but as always, all opinions are my own.

Those looking to befriend Phileas may also find him at his extravagant 19th-century colonial Safari camp at the epic foodie festival, Taste of London in Regent’s Park from 15th – 19th June 2016. Think colonial style tents, all manners of flora, fauna and botanicals and exotic cocktails… And if that’s not enough to float your boat, we’re promised a separate G&T bar too! See you there?

A food travel & lifestyle journal, chronicling my culinary and other adventures around town. View all posts by The Foodie Diaries

Stay ahead of the curve. Sign up to my newsletter for a bi-monthly bulletin on the latest word in food, travel, culture, life and style…

#MumbaiMeriJaan 🇮🇳 Happy Republic Day! #TheFoodieDiariesBombay
#Thoughtoftheday: Wherever life plants you, bloom with grace 🌸🌺🌼 #ForeverUnderTheFloralSpell
Wake me up when January ends 💤 #Mood #TheFoodieDiariesBombay
What to eat when you’re expecting 🤰🏻🍕🍝🍰🍫 While I’ve had more than my fair share of preggo cravings for carbs, chocolate and (yes, pasteurised) cheese, I’m definitely doing my best to strike a balanced diet that deliciously integrates essential vitamins, fibre and nutrients too (#WatchThisSpace for a foodie’s guide to pregnancy coming soon on my website!) A kick of protein is a particularly important baby-brain booster in the third trimester, although we #vegetarians do have to work a bit harder to hit the recommended quota (6.5 ounces of #protein foods every day!). Eggs are a great source and rather craveable too, when they arrive baked in a fiery shakshuka with crunchy sourdough drizzled with olive oil! Turns out, eating healthy can be delicious too 😋🍳🍞 📍 @KitchenGardenbySuzette #31WeeksPregnant #PregnancyDiet #TheBabyDiaries
Sundays in Colaba! Any guesses on where we headed to for brunch? #ASundayCarPic #TheFoodieDiariesBombay
All about those basic pleasures 🥑🥑🥑 Avo sourdough game strong as always 📍 @TheTable_Colaba // #MillennialForLife #TheFoodieDiariesBombay
#DoYouSpeakBalmain🔥 A high-octane evening previewing @Balmain’s show-stopping Spring Summer 2020 Collection in the newly-opened #ClubSaintAmand @Lodha_Luxury! . Thank you for having us @VintiLodha and so so wonderful catching up with Team #Balmain @Gianmaria_Pizzocheri @ChiaraScaglia ! Swipe right for highlights 📍 Lodha World Towers #LodhaLuxuryXBalmain #BalmainArmy #TheFoodieDiariesBombay
Nothing quite like those Bombay blues and that rare sea breeze to make you hit ⏸ . 📍@TridentNarimanPoint // #TheFoodieDiariesBombay